A New York friday night, a friend brings me to the “The Heath” club at McKittrick hotel, a loft on one half filled with darkness, on the other half with small tables, people sitting and standing here and there, and a relatively big stage in the middle, lit with soft but bright colors, sifting through the busyness of the room. “You like dancing, that’s the place to be,” - he said and I danced. I danced as if there was no other people and the live stream of music was flowing in the space direct into me and I was flowing along with the energy evaporating from the stage. As I was drifting in the energy, time has lost its meaning as every moment was the time.

I was looking at Her through the beaming lights being so free and connected to the music which she seemed to be just a beautiful vehicle of. The music was streaming through her from above and you know this feeling of divine love and even excitement when it touches your soul. Whenever one asks me what music do I like I always think of this “divinity” which defines a good music to me, no matter if it’s a classical or jazz or a capella in a shower.

Inyang Bassey is a newbie to the performance world. But who could tell? She moves on the stage as it is the world and it belongs to her, she moves as if she makes love with the music which is her world, which she has discovered to be hers just couple of years ago. That I’ve learned when encountered her later for an interview we have blindly asked for. Интервью на английском языке. Переключитесь (справа).

Regardless of the fact that music has always been part of her life: Inyang was playing violin in the high school, she was even later composing and doing musical directions for college productions, randomly did gigs now and then, it never seemed neither to her or to her family that music is something you can do for a living.

“I was working regular 9 to 5 jobs in offices for a very long time and I was denying my talents and my calling, because there was no pathway. I went to Columbia pre-med school and I had no idea that music was the place I truly belong,” - Inyang was telling her story in a deep voice, with elongating articulation, making it sound sexual.

For 5 years Inyang has worked for a pharmaceutical company, and in 2009 when she had quit pharma, she was struggling her ends while working doing some administrative work for Carnegie Hall, when one day MOBY (famous composer/DJ/singer) was holding hearings at the Carnegie Hall for his next tour, looking out for the lead singer. “You got to try it!”, - one of Inyang’s friend said, and she did.

What a surprise it was for her, when she did pass with flying colors and was commissioned for a 5 weeks tour with no less but Moby.

It would be great, she thought, but what about “9 to 5” job? Contemplating she could not, she had to make a decision: to join and risk her job, where she had only 3 weeks vacations: to keep the job or to take a once in a lifetime opportunity.

He was telling Inyang later, if she couldn’t make it they would had to cancel the tour.

So she took the lead and… "ran away with the circus". 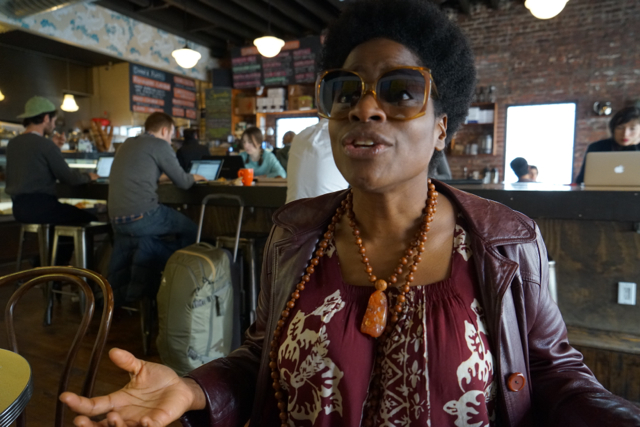 "It was Baptism by fire," - describes Inyang her tour experience: "Everyone on the tour was a pro, and then there is me, who’s never been on tour. I barely had any performing experience.
We only had 2 rehearsals in preparations for the 2 hour show. But it was so natural. Luckily to me, Moby is such a generous artist, he saw in me something I could not see in myself."

"I was accustomed to standing in my own area, by my microphone. But now there’s this huge stage which you know have to claim. Moby noticed that and at one point he just gestured to her in the invitation: “You can do whatever you want to do!”

“From that point on I was just like an animal unleashed, running from one end to another, squatting, performing with such wholeheartedness” 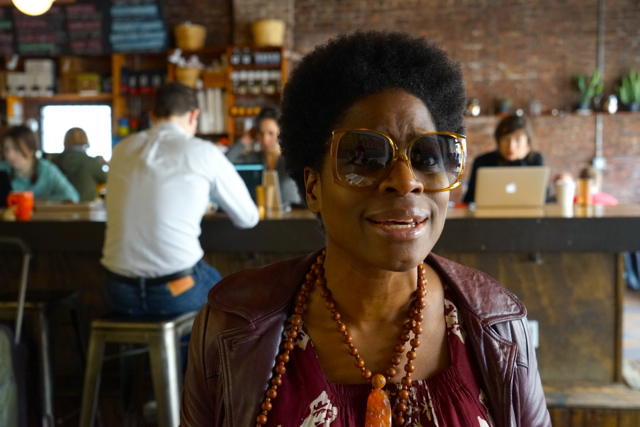 "If it hadn’t been for him I might not be singing right now. I did not realize how strong this calling is. I did not get it. I was walking in life with blinders." - Inyang sounds to be amazed at the revelational power her talent still has on herself as if in disbelief. "I knew I could sing but I did not know that my voice could make people cry. I did not know that I have some much within me to offer."

Wonder now how many of us have that issue where we cannot see our own talent? How many of us cannot see ourselves the way other people see us. Don’t we diminish our potential, diminish our own light. So one needs an affirmation, a sign, a big sign, like Moby who is of such high regard and how they are viewed in the world that they shine a light on you that you can’t deny. But how many signs, really, you need to see before you really get it?

Until only 3 years ago Inyang could even think about the singing career, as she tells it was beyond her capacity to even manifest. Raised by a single mother, she was educatedly defined to have a "proper" career for living, to have a paycheck, insurance, a security.

When 5 weeks later she came back, there was no job and she had to figure out how to live as an artist. “I always had a paycheck, always had a job, always had a medical insurance, always had security. But I had to give that up in order to pursue what I truly was meant to do. Now I don’t have much money, but I am really happy.” Inyang’s voice sounds very confident.

“Moby once told me: “I know you struggle financially, I know this isn’t easy, but every artist has been there. You have to walk through that in order to know that this is truly who you are. You can’t turn back.” There is no alternative. Denying your creativity is like suffocation.”

Now it is Joy - that’s what it is about being on stage for Inyang.

“Obviously, I want to succeed, but I judge myself less on stage than anywhere else. When I’m up there, it’s so true and it’s so honest. I feel like UNIVERSE SUPPORTS ME for what I’m doing for what I am supposed to be doing.”

“It’s so rare the opportunity to do what you love, it’s so rare to be embraced when you do it, that I stopped questioning what I am doing. It’s an offering, it’s a gift, it’s not ego, it’s just pure. It cuts through to people because it’s “unpolluted”. I have to embrace it and be an inspiration. If you inspire people you can’t walk away from that.”

Inyang is a Nigerian name, coincidentally sounding very much like a eastern harmony concept. Now with everything being so insync she confesses that she is able to love herself fully overcoming the greatest fear all of us have of being rejected. Inyang says she was one of those women who spend too much time waiting to start doing doing things until you are good enough: proving to self and others.

“I worked on shedding all the crap, doubt, the feeling of unworthiness, saying “I deserve for people to love me.” - Inyang continues: “When you start to honor your desire, your wishes, your dreams, then everything starts to flow.”

Apparently, songs happen to Inyang in a very organic way. A lot of times she would be dreaming, when the consciousness is numb, and hear a song and think: “Hmm… it’s a really great song!”, having to wake herself up, hand-record the ideas that are coming out.

Inyang explains her creative process in a divine way: “I don’t go and sit down and take my notepad or a guitar, trying to make a song. In fact songs just hit you. It can happen on a subway. One time it happened on an airplane. I was sitting next to a stranger, and all of a sudden a song started happening. So I put a blanket over my head and was singing to a voice recorder.”

“When I am writing, it’s like “Oh my God, Oh my God!” because whatever it is, it’s coming through, you are so open that it’s flowing through you and it’s such an exhilarating feeling when you are making something out of nothing. I always wonder - is it gonna happen again? Because I don’t plan it. It’s inspiration.”

“A lot of the songs are very personal and I did not realize how fulfilling and cleansing and empowering it would be to be doing this. There is nothing more empowering than speaking your truth and showing your vulnerability and then having people embrace it.”

And people do. Like I did embracing Inyang’s musical presence. I surrendered as if I was waived to a permission, probably in the way Inyang did with Moby taking over the stage. But isn’t it also true that one can surrender easier witnessing the complete surrender on the other side, this time on the side of the performer. Surrender in its purest raises the vibration, inspires, releases and elevates. 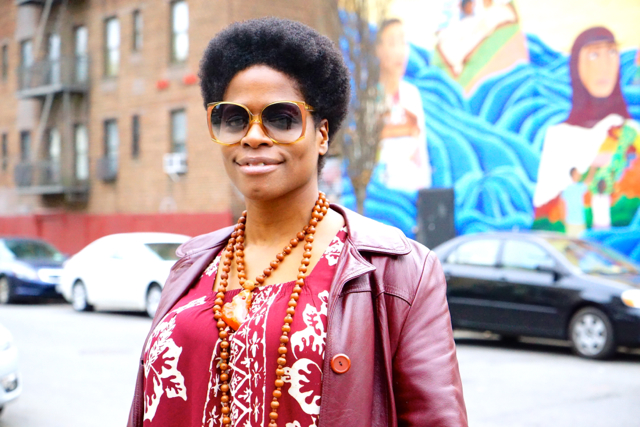 Things do not come unless you ask for them. Some may think that Inyang’s is a story out of ordinary, but look from the other side - it takes a person to recognize her own talents first. And maybe it takes you to start asking yourself what talent you have been denying or not giving too much importance to, not considering it being worthy enough, not being good enough?

A woman I know has emailed me recently saying that the stories I find are inspiring indeed, but how to discover your true calling, how to find something you would be truly passionate about? Look back in your life, your childhood, chances are those are the things which you enjoyed as a kid most. Things that you could do for hours without noticing time passing by. Chances are that you will find your true calling. Intention is everything.

It is just important to hear your voice. In some cases - literally.