What a busy busy night—the TEDActive reception was at full swing, conversations were clicking along at the speed of reading names off attendees’ badges. Tip-toeing my way out of the crowd, I paused before the mini-tortillas station, feeling hungry at last for real food instead of the bite-sized ideas much more readily available around me.

She was waiting for her nano-tortilla and I don’t remember our conversation starter, but in a minute we were deep in communication.

“I’ve liked you for a year now”, I volleyed back.

A year ago she spoke at a TED conference as a TED fellow, and I had watched her talk mesmerized. I’d never imagined bumping into her casually in a queue for finger-sized tortillas. While we chatted at the reception, she mentioned that as an artist she had been travelling for a year now and that she quit her “day” job to do so. ‘That is my story’, I thought and we agreed to meet for a proper interview the next day, skipping the scheduled TEDTalks session (yes, Chris, we have sinned).

That is how pretty much every TEDTalk opens up, and our interview was no exception.

Before Christine became an artist she had a long and, as she describes it, “confusing” way, trying various odd jobs, from a cashier at Barnes and Nobles to a teacher’s aid to a digital archivist at a publishing company.

“For a long time I couldn’t really figure out what I wanted. Career-wise in the deaf community there are typical occupations: you work in a deaf school as a teacher, or you work at a video relay service company – they provide sign language interpreters online, or a health care provider working with other deaf. This depressed me because the options felt very limited,” Christine says during our interview.

“As I grew up I sucked at everything I did: math, science, everything. I was never a great student, I had a hard time communicating my thoughts. That’s one of the reasons I got into the arts; that said I also struggled as a painter, I couldn’t see my own voice in the paint. It’s interesting that when I turned to sound… I instantly found that I had a voice, and it automatically gave me a platform”, explains Christine, continuing:

Sound has a strong social status. People listen. When I started using sound in my art, I started getting a lot more offers and opportunities”

She says she had always been wanting to quit her job anyway, so when TED gave her the fellowship and she had to take days off work to attend the conference, which would burn through all her vacation time, it was the pivotal point of the decision to quit, which seemed effortless at the time. But. 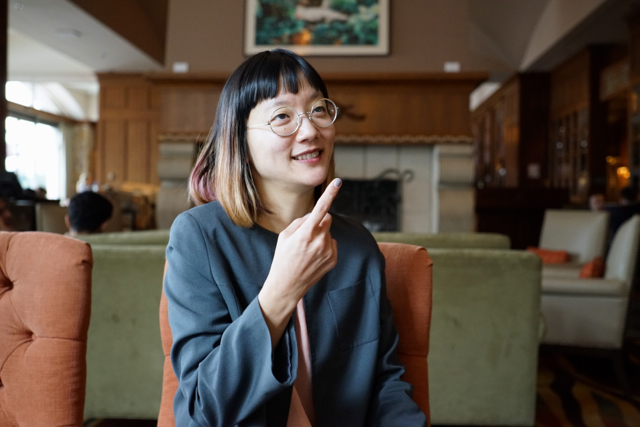 “I fully invested in being a full-time artist, gave up my home, and left my job, and all those things were very scary, but when you do them all together it works out.” Christine points out, continuing:

When you do something that really frightens you it will give you the most benefits. Now that I left my job, it feels as if the world is taking care of me”.

And now for Christine?

“Now I feel so fucking happy. I never felt so whole. Before I always felt a little bit on edge and disappointed in the arts; I felt angry; I was always frustrated, constantly. Even though my family was extremely supportive, they were always telling me, that I was fussy and difficult, that I had fire in me. But it kept burning inside. When I found art, focused on sound, and left my job, every piece just fell into place. I got more and more offers and opportunities”, she adds.

“I also met my boyfriend. He is a very happy person and although it initially took me awhile to get used to, now I find it absolutely refreshing.” Christine softens, making a gesture as if virtually hugging him.

Christine was born in California as a first generation U.S. citizen, her parents immigrated from Korea, as well as did most of her relatives on both sides.

“I have a huge family, 50 cousins”, she laughs. Christine has an older sister, who was also born deaf.

“My mom is the last child in her family, and when she had two deaf children, it was tough for her. But she really was supportive, to make sure we are in the right school, make sure we had everything we needed, and my dad is the same way,” she says with appreciation.

The biggest thing about my family: both of my parents sign. I know a lot of Korean families with deaf kids that will not use sign. I feel lucky that my parents believed in full communication”

She adds, “When we were growing up, technology for the deaf was not as developed as it is today. I would ask my mom to help me a lot, but she would tell me to do it myself, to use the TTY. I would beg, “Please mom”, but she would refuse insisting “Do it yourself, do it yourself.” I realized I became independent because of her persistence. She wanted me to become independent, so she pushed me out into the world to become fully engaged.” 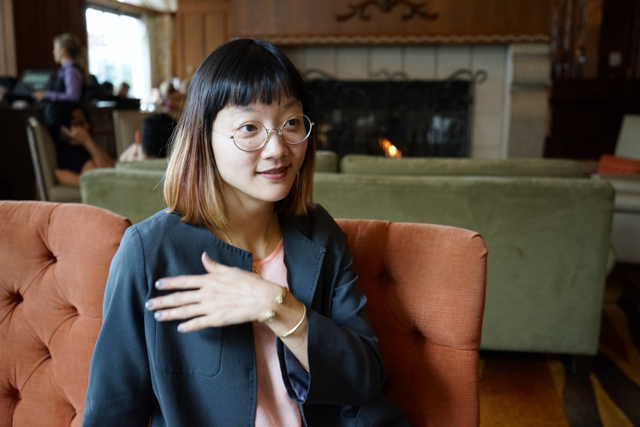 Thinking back our conversation, I am still wondering how many perspective paradigms Christine has had to adapt to at once: being an artist without compromising her integrity, feeling Korean, but being American, being deaf, but struggling through career identification and self realization, being a woman… do you have to be super tough to do all that?

“I don’t know if I am tough”, shrugs Christine, “I know that I am very motivated and determined. People think that I am bold and know exactly what to do, but really, I just do it. I don’t fake, I just continue. Some people ask me what makes me wake up every morning… I JUST DO IT! Failure fuels me.”

So is that a Korean thing? I wonder again, as I know the necessity of resilience and adaptation to be true about myself too. Christine echoes the importance of maintaining integrity, mentioning that she enjoys adapting to different cultures, different circumstances, but would not ‘adapt’ to anything which would question her artistic and personal integrity.

However, the struggle of adapting remains present because it’s not just about adapting, it’s also about making it given all paradigms and perspectives and challenges that no amount of adaptation can surmount. It takes what it takes. 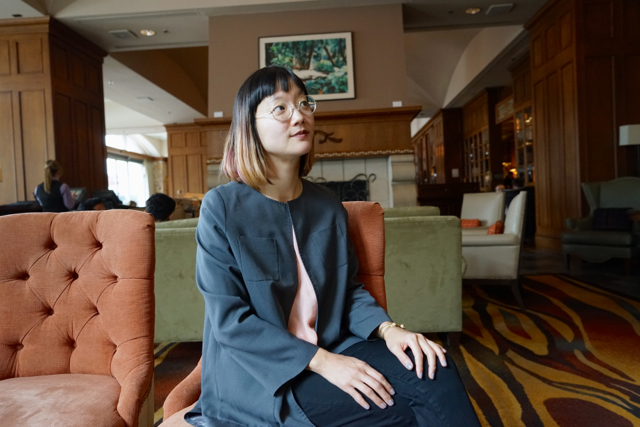 “Because I didn’t understand the world I felt it wasn’t fair and I got angry”, Christine is making the point about the world being fair to her. “But the older I got, the more I understood how the world works – it was designed for hearing people – and so I said: “OK, let’s play this game,” sometimes I guilt-trip people in my attempt to embrace the difficulties I face, sometimes I use the deaf card, sometimes I play the minority card. I work it to make people feel what I feel in my communication struggles. Some will say: “Oh, you are a bad person, you should feel guilty”. But that’s how I deal with life and the cards I have been dealt”, she simply puts as she also reasons: “I was so frustrated growing up, now I have embraced it and turn it back on the world.”

“Once on a airplane, I was looking out the window and suddenly a bag of peanuts hit me in the face. I turned around and the flight attendant was saying “HELLO?!”  I said: “I’m deaf!”, pointing to my ears. Apparently she had been calling at me a number of times, when I didn’t respond she threw a bag at my head in order to get my attention. I was furious “What a slap in the face!” The point taken: that is how the world works!” she offers to support her argument, laughing.

Those little things make me tick, but they also make me keep going”.

It looks like she has figured her rules of navigating the world and is happy about it.

“If I would had to describe myself last year, I would have described myself differently. But now I feel very satisfied, very content. Now I feel like a very flexible person, easy-going,” Christine confirms and adds, “though I do get stressed easily.”

I asked Christine about the purpose, if she knows what the purpose of her life is, though I know that asking a “now” person about their purpose wouldn’t quite make sense, as the sense is never in the now, but in connecting the dots afterward.

“It’s difficult to say at this stage what’s the purpose of my life, maybe in 20 years I will understand better”, she replies, “Some people say that I am representing the deaf community, I don’t know… Sometimes I just want to make my family proud, even though they don’t understand my work, which is fine; they think because I’m an artist I should paint a house with flowers. They are cute.” 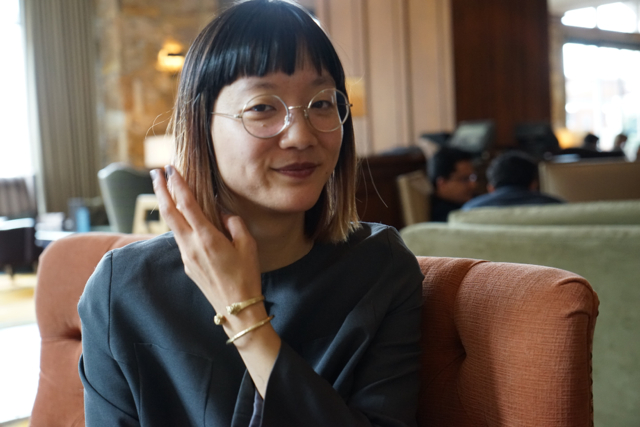 However, one of the main reasons she became an artist were not flowers on the wall obviously. But a fear of not being heard. The frustration that becomes almost physical, when you are scared of losing your identity, a fear of becoming invisible, because of not being heard or understood. The resilience which to me is embodied in Christine is there… in having the courage to leap into the space of the fear, to flourish there, and to become “fucking happy” about it.

Special appreciation is for Lisa Reynolds for the help with interpreting 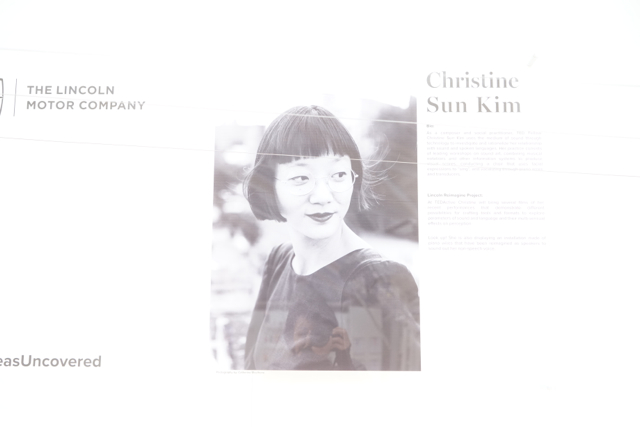