San Cristobal de Las Cascas is full of peculiar folklor enchantment town in the middle of Mexico. Sitting on the mountain altitude hills it feels cozy with the aroma of the freshly brewed artisan coffee aroma floating along the paved streets, sneaking into the windows of the colonial buildings, where I met Claudia at her workshop. We met at 4 pm after she finished her mid-day swimming session – one of the beauties of owning your schedule.

Claudia Munoz Morales was a famous persona in a fashion business of Mexico, until 7 years ago she decided against her flourishing career when she moved from a bustling Mexico City to a tiny town of San Cristobal famous for its rustic beauty. As she describes the decision there was a definite “closing of different cycles” of her fashionable life in the capital based on the realization that the lifestyle of expensive shoes, fancy parties and affairs, was shallow and meaningless.

“I got to the point when I was 33 years old, to the “peak of my life”, bought an amazing apartment, had the best clothes, went to best places, had the most handsome boyfriends, jobs, and I wasn’t satisfied with what I was doing. All of that was something what the society tells you is perfect. But it’s a lie.” – started off Claudia.


“All my life since I was a schoolgirl I wanted to do fashion. And when I was doing it finally at the Mexico Fashion Week I just did not like it. I could not believe that people in that business put values on the things that have no value at all. Valuing people because of what they wear, how they look?! I had such a big crisis because I did not know where to go from there. So I decided to take a sabbatical year. The decision was easy and more of an impulse. I had to do it.” says Claudia in a melodic voice sipping coffee in her small office full of embroidery, samples of textile and ready pieces.

Claudia looks content: relaxed, very fit and very beautiful with a mild smile but fire in her eyes, which at times dim with a distant fleur of nostalgy or a “train of thoughts” – usually happens when a person dives into the parish of memories.

She arrived at San Cristobal knowing nobody or nothing about the place, and took her time walking the streets with her dog, meeting her new neighbours, not knowing back then that later she would start a business here. A fashion business, but with so much different perspective – making artisan textile fashionable, dignifying indigenous women.

“While trying to adapt to a new free lifestyle I went to all sorts of classes, meditations, courses available. Such I took a textile class once “A natural dyeing technique” with a bunch of artisans, I was the only one who was not an indigenous woman.” – describes Claudia her first sabbatical months. “At first those women were trying to sell me stuff they were doing. But me being from the fashion background, I was very picky. I started talking to them from that perspective – giving advices on how they could improve their crafts if they wanted me or people like me buying them quality wise. Finally one day they brought me something according to my taste. That is where and when I met Francisca, who is today the leader of artisan group of women I work with. That is how it all started.”

Today Claudia works with a group of 16 women from Chamu – one of the indigenous community of Chiapas, a poorest state in Mexico. Together they have combined Claudia’s knowledge for design and fashion business with the skills and heritage of the traditional weaving, turning it into amazing and unique pieces of clothes and accessories.

“CHAMUCHIC” is the brand name Claudia came up with. Chamu is for the ethnic group she works with, and “chic” is for elegance and sophistication. But it’s not strictly about “another” artisan product. It’s a brand that changes your perspective on what is clothes to you now.

“I like clothes but now I want to know the story behind it – who made it, how it was made – by that dignifying indigenous women who did that,” says Claudia about the idea behind her work.

Hard to acknowledge but even these days in Chiapas there is a lot of racism. 60 years ago indigenous population was not allowed to step on the sidewalks, still today there are places in San Cristobal which do not allow them to enter. As one of the sequences – wearing traditional clothes is not a socially acceptable norm. Indigenous people, and women especially, are oppressed, not recognized, added to the pool of issues like poverty. 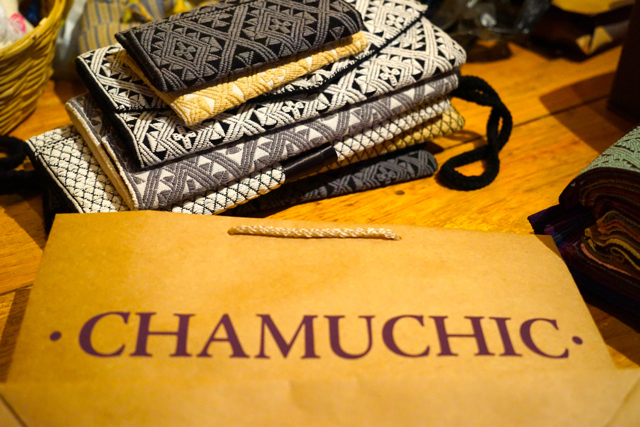 “I do not want “charity” from compassionate buyers, I want people to buy it because it’s a beautiful piece and because there is a connection that is happening between a group of indigenous women and you. I am not innovating design with my brand, but I am changing the perspective from what people treat it. Changing paradigms is the new trendsetting. Looking at the traditional design from the fashionable perspective is my fascination now.” shares Claudia sounding very inspired by the approach she’s taking.

Indeed, for local women-weavers seeing their clothes being worn in a fashionable way, their photos being published in a fashion magazines, brings their pride and self-esteem up, bringing pride for their culture up. Hence making the dignification the strongest insight for changing people’s lives in Chiapas.

“I have tried that – changing their lives more in economical terms at first – helping them more financially, but I already know that it’s impossible. This country has a lot more problems then I can deal or influence upon. But what I have been observing in the past 3 years is that having a little extra money not for the basic needs of food, but for a pair of earrings, or having their nails done, or having a new social circle, new interests, exposure, help them feel so much better about their lives and self-esteem.”

“People sometimes narrow the image of indigenous people to being poor, crying, with the starving kids. But I do not see them like that! I see them beautiful, laughing and happy. Because their happiness is not about money! I have friends in Mexico City with a lot of money but are in pain.”

That was the idea Claudia came up with, how to tell the story behind the brand without victimizing, but building up pride, dignity, self-esteem, thus making the difference for those women. Still poor, yes, but pretty and vain. Women always want to be beautiful.

That is the way to changing the paradigm, several in fact:
a) how people can start willing to make money-related choices contributing to the social cause
b) how to help a social cause without calling for compassion but by making a quality product
c) how the brand can help change the whole culture and social injustice

But indeed, the idea is just a nutshell of a huge work with the community. Chamuchic works with women on a formal committed basis, placing a certain amount of orders, providing a stable income every month. The work with the community consists of different cooperation levels including a number of workshops and consulting, trying to identify the strong skills of every artisan be that a creative development, an accounting, or sales and trying organize the community in a “business” structure in order for them in the future go independently.

Since everything is handmade, it takes a lot of time to produce, and is aimed at almost “high-end” market, trend setters, people who started to search for their mexican identity in a cool sophisticated trendy way, though not being ridiculously expensive. Due to the high labor intensity the producing capacity is 100 pieces a month. The enterprise is profitable but Claudia reinvests everything back into the community. She now starts putting efforts into positioning of the brand not only locally but internationally.

On the international arena, one of the challenges Mexican artisan market faces is the cost of labor which is relatively more expensive comparing to the cost of similar type of products in for example India, where the fair salary is considered at the level of 2 dollars per day, whereas in Chiapas 2 dollars is the cost per hour. Claudia and her colleagues are now trying to figure out where and how to market their products, improving the quality of the end-product and targeting a specific niche ready to pay for that.

“But you know what… I would rather spend time figuring out these questions than figuring out what the model is going to wear for the show. I chose the career of a designer long time ago and I love it now, because working with artisans opened me the possibilities of truly exploring the creative power, rather than working in the mainstream fashion. Here I have a complete area for me to grow as a designer.” – she adds.

Another important aspects of Claudia’s approach towards artisan’s work is not to impose the design. Through the creative workshops they collaborate on the production features, but the design comes solely from the community.

While talking about the business I was pondering myself with a question – how does it feel for an urban power woman change the lifestyle so drastically. But Claudia puts it quite clearly: “Now I am happy. And I am more satisfied with what I do. I definitely enjoy my lifestyle more. I do love Mexico City and I left it not because I did not like it. I even tried coming back twice, but could not. I became an “uncomfortable friend” who talks about social injustice and real world problems.”

“I do get frustrated. But now this is about important things like social justice and this type of frustration is the anger which gives me a motor to wanting change things.”

“For many years I was hating my country for the way government makes wrong choices. But with my previous job I was part of the problem, now I’m part of the solution. The work I have now is my way of showing contribution to the change. Maybe in a small way but that gives me a lot of satisfaction. But I am not doing it because I want to “help people”, but because it has to be done! If you live in the country like Mexico I don’t see why not everybody is doing it. We are the same country, we are the same people, why do you want to live better than your neighbour.” – she concludes.

We have spent two days with Claudia, meeting her friends for a dinner, visiting the weavers’ house in the village, driving around the area, and I could witness the deep sense of satisfaction filling her both for what she does, and how she lives it – changing paradigms for her own life.

Claudia’s story to me was a perfect sample of a 30UP pattern: reaching the tipping point to do the meaningful change for the life of self and others, still following your passion for profession, achieving the level of satisfaction for the chosen path. Here, I do not want to use the “happiness” term for it’s conventional meaning – being happy in your personal life. Here we are talking about the life of meaning and satisfaction. With that said, I wish Claudia to be happy indeed.